Many individuals seek alternatives to cow’s milk due to the rise of plant-based diets and lactose intolerance. Almond milk is one of the most popular plant-based milk due to its rich flavor and texture. As often known as a processed beverage, many might be concerned about its nutritional value and safety. In this article, we will go over almond milk’s health benefits and drawbacks, especially its effect on height growth.

Almond Milk – What you need to know

Almond milk is blended and filtered with almonds and water. It is simple and easy to make at home, but most people prefer to buy it pre-made.

Based on the variety, almond milk may also contain other ingredients. Most commercial almond milk contains extra thickeners, preservatives, and flavorings to enhance flavor, texture, and shelf life.

As it is neither an animal nor a dairy product, almond milk is suitable for vegans as well as those who have lactose intolerance or allergy. However, if you are allergic to tree nuts, you should avoid this.

According to FoodData Central, one cup (262 ml) of unsweetened almond milk can provide: (1) 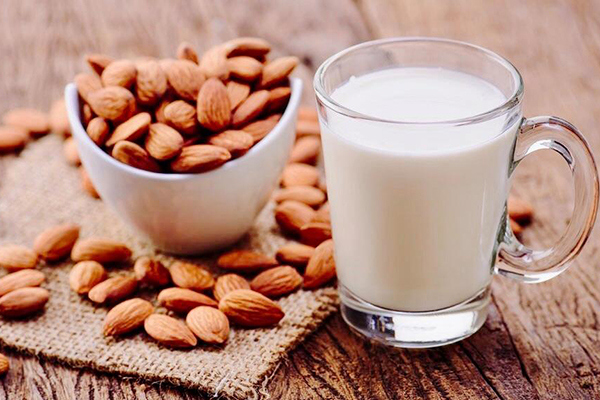 Almond milk might have certain negative consequences, mostly as a result of overuse or allergies. It is best to consult with your doctor to find the right daily amount based on your physical health status.

Carrageenan is an ingredient found in packaged almond milk. It builds up because almond milk has an inordinate amount of it. As a result, it could lead to inflammatory bowel disease.

Therefore, anyone with inflammatory bowel illness should exercise caution. If you experience any of these symptoms, speak with your doctor.

Does almond milk make you taller?

Phytic acid, which binds to calcium, iron, and zinc to lessen their absorption in the body, is another chemical found in almonds. This might make it harder for your body to absorb these nutrients from almond milk.

As a result, almond milk may not be the best choice to help your body grow taller. If you have lactose intolerance and look for a substitute, you might consider other non-dairy options and take supplements.

Other health benefits from almond milk

Almond milk is one of the non-dairy milk with the fewest calories on the market; a great choice for anyone who wants to reduce their calorie intake. It is also a natural source of vitamin E, a class of antioxidants that aid in shielding the body from disease-causing agents known as free radicals.

Select almond milk brands with a higher almond content, between 7 and 15%, to get the most nutritional value and health benefits from almonds. 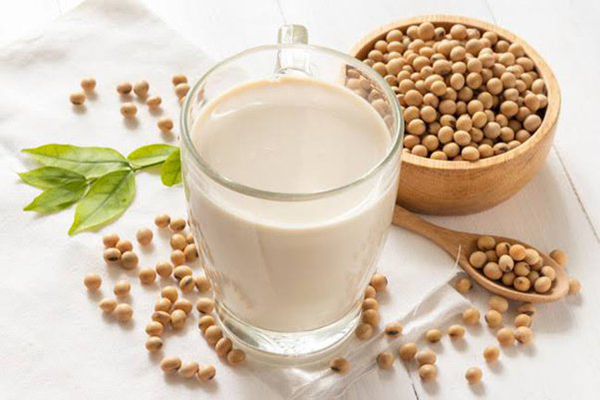 Soy milk is a popular dairy-free substitute for dairy milk in terms of nutrition. There are about half as many calories, fats, and carbohydrates in it as in protein, which is comparable. One cup (240 ml) of unsweetened soy milk has a calorie count of 80–90, a fat content of 4–4.5 grams, 7-9 grams of protein, and 4 grams of carbohydrates. As the body cannot create certain amino acids, soy milk is a rare plant-based source of high-quality “complete” protein, containing all nine essential amino acids.

To enhance flavor and consistency, thickeners and vegetable oils are frequently added to commercialized soy milk. So it is crucial to go over the ingredients on the label to choose the healthiest option in the store. You can also make it at home with just soybeans and water. Soy milk recipes are widely available on the internet at your own convenience.

Coconut milk is made by blending the coconut’s white flesh and water. Based on the thickness of this concoction, it is categorized as either coconut cream or coconut milk. They both are quite popular in Southeast Asian and Indian cuisines.

The flavor of coconut is sweet but not overpowering, and coconut milk has a creamy consistency. One cup (240 ml) of coconut milk contains 45 calories, 4 grams of fat, no protein, and almost no carbohydrates. It has significantly less protein and carbohydrates, as well as half the fat and calories of dairy milk.

A balanced diet that includes a moderate amount of coconut milk shouldn’t raise any red flags.

Among all the non-dairy milk, rice milk is the least allergic as it is a secure option for people who have nut, dairy, gluten, or soy intolerances. Natural sweetness and a light flavor characterize rice milk. It has a little watery consistency and tastes fantastic on its own, in smoothies, as a dessert, and with porridge.

Similar to dairy milk in terms of calories, rice milk has almost twice as much carbohydrate content. Additionally, the amount of fat and protein is greatly reduced. In one cup (240 ml) of rice milk, you can get 30 to 40 calories, two to three grams of fat, one gram of protein, and 27 to 38 grams of carbs.

In addition, rice milk has a high glycemic index, ranging from 79 to 92, which means it is quickly absorbed in the gut and sharply raises blood sugar levels. It might not be the greatest choice for those who have diabetes.

It shouldn’t be a problem for the majority of individuals to consume rice milk.

If rice does, however, make up most of your diet, it may be advantageous to diversify your diet by consuming a range of grains, including various non-dairy kinds of milk. 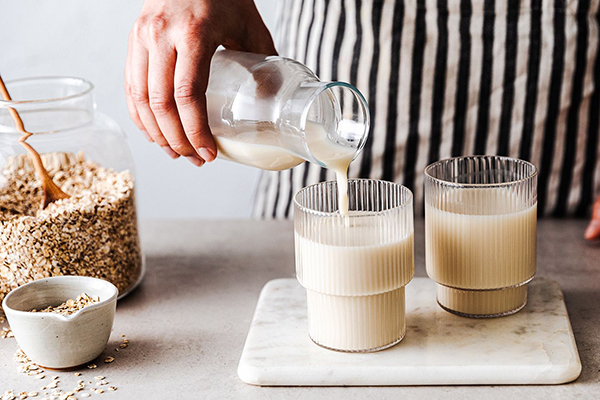 As the majority of non-dairy milk, oat milk is formed from a combination of oats and water. It has a moderate flavor and is naturally sweet. It tastes fantastic with cereal or in smoothies and may be used in cooking the same way as dairy milk. To get the desired taste and texture, manufacturers nevertheless frequently add additional components including salt, oils, and gums.

The amount of calories in oat milk is comparable to that in cow’s milk, but it has up to twice as many carbohydrates and just around half as much protein and fat. It’s interesting to note that oat milk has a high content of both total fiber and beta-glucan, a soluble fiber that gels up in the stomach as it goes through.

Oat milk is inexpensive and simple to make at home.

Rich and creamy, with a sweet and delicate nutty flavor, cashew milk works well as a coffee creamer, a smoothie thickener, and a substitute for dairy milk in baked goods. It has less than one-third of the calories, half the fat, and a sizable portion of the protein and carbs found in dairy milk.

For those with higher protein needs, cashew milk might not be the best choice due to its low protein content. If you fail to achieve your daily protein requirements or have increased protein needs, it can be worthwhile to switch to milk that has more protein, like soy or oat.

The low sugar and carbohydrate content also makes it a good choice for those who need to watch their carb intake, like those with diabetes.

Although almond milk contains all the nutrients you need to grow taller, it also has phytic acid, which prevents your body’s ability to absorb them. Almond milk may not be the best dairy milk substitute, but consuming it in moderation should do no harm to you. As with any milk, drinking them alone is not the wonder solution for physical development. You should consider combining it with a nutritious diet, an active lifestyle, and enough sleep to maximize your growth.